I am the proud husband of Christilynn and dad of Kayleigh and Bennett, and am also blessed to serve as a pastor and chaplain in the United Church of Christ. I recently began exciting new calls as the Pastor at the Halifax Congregational Church, UCC, in Halifax, MA, and as a Chaplain for New England Hospice on their South Shore Team.
Previously, I have served as pastor at UCC churches in East Longmeadow and Spencer, MA, Norway, ME,  Atkinson, NH, and Jamaica, VT. Before beginning my ministry, I worked for 6 years at Foxwoods Resort Casino as a stagehand in the entertainment department, specializing in stage lighting and administration (1996-2002.)
I have also worked for my family’s flooring business at various times over the years, typically during school breaks growing up, and later, between my ministries in Vermont and New Hampshire. I hold a BA in Theater Studies from the University of Connecticut (1997,) a Master of Divinity degree from Andover Newton Theological School (2003,) and a Doctor of Ministry degree, also from Andover Newton (2015.)
I grew up in Waterbury, CT and have lived all over New England during the course of my careers and education. My interests include travel, the beach, anything Disney, NASA, camping, board & card games, Boston, watching the Patriots, trivia, Star Wars & Star Trek, theater & music, craft beer, coffee, and playing with my kids. I am also a 20 year Freemason and enjoy helping out in the community however I can. 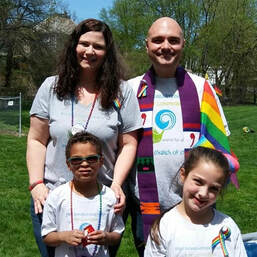